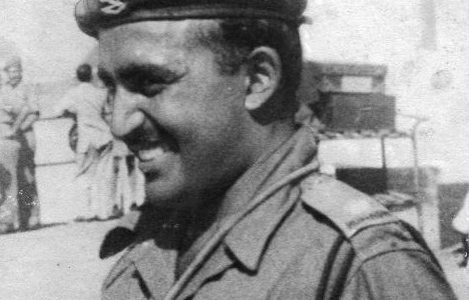 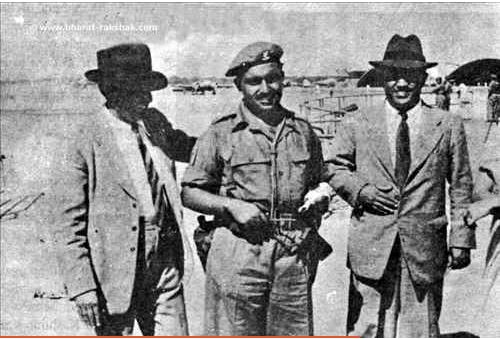 Last known photograph of Major Somnath Sharma before he was airlifted to Srinagar to join the battle against Pakistan infiltrators. Note his left hand is in plaster sustained at the hockey field. Despite insisted on going to the battle front along with his company. His argument was “who knows my men better than me” (Photo Courtesy: bharat-rakshak.com.

The wireless crackled at the Headquarter of 161 Brigade, tasked to protect the Kashmir valley against the Pakistan infiltration in 1947. Amidst the rattle of machine gun fire in the background, the voice of Major Somnath came through the wireless “the enemy is only 50 yards from us. We are heavily outnumbered. We are under devastating fire. I shall not withdraw an inch, but will fight to our last man and our last round.”

Brigadier LP Sen , the commander of the 161 Brigade on the other side of the wireless was a worried man. If Major Somnath and his D company of the 4 Kumaon stationed at Badgam was unable to stop the enemy, Srinagar airport was in imminent danger of being destroyed and subsequently Srinagar city might get overrun.

All bets were on Major Sharma’s performance at the battle field. Oblivious to the rest of India, that day, 3 November 1947, the fate of Kashmir was in the hands of a 24 year old major. Brigadier LP Sen (right), the commanding officer of Major Somnath Sharma. Brigadier Sen was the last person who spoke with Major Sharma, before the latter died in the battlefield. Brigadier Sen has paid glowing tribute to Major SOmnath Sharma’s bravery in his book ‘Slender was the Thread: Kashmir Confrontation 1947-48′. Brigadier Sen’s recommendation would have certainly played an important part in honoruring Major Somnath Sharma with the Param Vir Chakra. Sen rose to the rank of Lieutenant General and held the appointment of GOC, Eastern Command , a post he held during the 1962 Indo-China War. In the photograph Brigadier Sen is seen in conversation with Major General Kulwant Singh (left), discussing the progress of the battle in Kashmir.

Heavily outnumbered by the enemy by 1:7, and with no answer for the heavy mortar being rained by the enemy, Major Somnath and his company held on for crucial 6 hours and fought one of the most glorious battles of the Indian Army. This gave enough time for the reinforcements to reach and stem the enemy advance.

Major Somnath Sharma was son of Major General Amarnath Sharma who retired as the first Director General of the Armed Medical Service. Major Somnath was born on 31 January 1923 in Himachal Pradesh. He was commissioned in the Kumaon Regiment on 22 February, 1942. During the Second World War, he had fought in the Arakan Operations. Somnath Sharma’s younger brother General VN Sharma served as the chief of the Indian Army during 1988-1990.

On 22 October 1947, Pakistan launched the tribal invasion of Jammu & Kashmir. The intention was to grab the Kashmir valley by force. Once Kashmir became a part of the Union on October 26th, her protection became the responsibility of India. To save the State from a tribal invasion, backed by Pakistan military, which was approaching the valley at a very fast pace, India dispatched troops to Srinagar. The first batch of Indian troops reached just in time on October 27th morning to stop the enemy at the outskirts of Srinagar. It was almost a touch and go affair, the military balance was precarious. It was anybody’s battle.

The D Company of 4 Kumaon, led by Major Somnath Sharma, was airlifted to Srinagar on October 31st. When the company was asked to move to Srinagar, Major Sharma’s arm was in plaster. He had suffered a fracture on the hockey ground and was advised rest till the plaster was removed. He insisted on being with his company at this crucial hour and was allowed to go. His argument was that no one knew his men better than him.

Meanwhile the 1 Sikh has stymied the main body of the tribal invasion at Patan. The enemy changed tracks and resorted to guerrilla tactics to enter the Srinagar valley. On November 3rd, Brigadier Sen dispatched 3 companies to reconnoiter the Badguam area to look for raiders approaching Srinagar from the northern direction. As no enemy was seen during patrolling, two companies moved back to Srinagar by 1400 hrs. D Coy led by Major Sharma which had taken up position south of Badguam, was however asked to stay on in the area till 1500 hours. At 1435 hrs, D Coy was subjected to firing from some houses of Badgaum village. The Coy did not return fire for fear of killing innocent people of the village. Suddenly, a large force of the enemy, about 700 strong, appeared from a depression to the west from Major Sharma’s position, supported by 2-3 inch mortars.

Outnumbered and outgunned, Major Sharma knew he was the only defense which lay between the enemy and Srinagar airfield, the only lifeline between the Valley and the rest of India. He had to prolong the battle and wait for reinforcement. For next six hours Major Sharma and his brave jawans gave extraordinary resistance. It was just enough to force back the enemy and allow for the reinforcement to arrive.

Major Sharma lead from the front, personally rushing across, fully exposed to enemy fire, as he laid out markers for IAF planes and ran across to his sections to coordinate firing. When heavy casualties adversely affected the firing power of the company, Major Sharma with one hand in plaster, took upon himself the task of frilling the magazines and issuing them to men operating light machine guns. While he was busy fighting the enemy, a mortar shell exploded on the ammunition near him. His last message to Brigade HQ that he will fight “ to the last man and to the last round” is now part of Army lore. In the battle of Badgaum, Major Sharma , one JCO and 20 other ranks were killed. 200 enemies were eliminated.

Three days later, Major Sharma’s body was recovered, Mutilated beyond recognition, a few pages of the Gita , that he always carried in his breast pocket, and the empty leather holster of his pistol helped to identify the body.

As a young boy, Somnath would spend time with his maternal grandfather Pandit Daulat Ram in Srinagar and his favourite pastime was to listen to the Bhagvad Gita. This influence of Krishna’s teachings to Arjun was to remain with Major Somnath till his last breath. This time unfortunately Arjun did not return from the battlefield.

Major Somnath Sharma was awarded the Param Vir Chakra, the highest military honour in India. He was the first recipient.