Section of Duel Avenue. Much has changed since Warren Hastings and Sir Francis fought a duel here. Currently, this road cuts through the Kolkata Armed Police lines and ends at the Calcutta Meteorological Observatory campus.

About 230 years ago in Calcutta, a duel was fought which could have changed the history of modern India. Fighting the duel were two of the most powerful men in India, Warren Hastings, the then Governor General of Bengal (defacto India) and Phillip Francis, member of the Governor General’s Council. The two men shot at each other, and any one of the two could have died that fateful morning. This duel which caught the public imagination at that time was fought at a deserted road in Calcutta, which since then has come to be known as the Duel Avenue. Probashionline team traced back the history by visiting Duel Avenue which runs through the campus of the Kolkata Armed Police bordering the Calcutta Zoological Park. At the end of the Duel Street also stands another venerable institution of modern India, the Alipore Observatory, Calcutta which was founded 1877 and is the first observatory in India to record weather phenomenon using contemporary scientific methodology. The article delves on the circumstances and what transpired at the famous duel, from which the Duel Avenue derives its name.

At 5.30 am on 17th August 1780, four men were seen huddled in an animated conversation on the road (current National Library Avenue) leading from the Beveldere Estate (now National Library) towards Alipur. There seemed to be urgency in their gestures barely visible in the morning dawn. The men must have been of means for a coach with shiny horses stood nearby.

This was not a stroll in the park. Two of the most powerful men in India at that time were squaring up for a duel, where both would fire a gun shot at each other. The two duelists were Warren Hastings, the governor general of Bengal (de facto India) and Philip Francis, member of the Governing Council of Bengal. The other two men who accompanied the challenges were their respective seconds who would oversee the duel and see the rules were followed, they were Colonel Pearse, the Commandant of Artillery, as the second to Hasting and Col Watson the Chief Engineer at Fort William, as second to Francis.

The site of the duel had to be discrete, it would have been extremely improper to see the two men holding the highest office in British India, firing at each other under public gaze. The early morning riders were expected any moment. The men started to walk towards Mr. Barell’s residence, (currently St Thomas school); another member of the Governing Council, on an old road that separated Mr. Barell’s ground from Belvedere. Moving a little further a dry spot was chosen as a proper place for the Duel. The street currently exists in Kolkata and is known as the Duel Street/Avenue which the Probashionline team visited. The road currently runs from the National Library avenue cutting through the Calcutta Armed Guard campus and ends at the meteorological observatory.

The Duel was an outcome of ego clash between the two gentlemen. Sir Francis along with members Monson and Clavering would form the majority in the Governing Council to block many a policy decisions of the Governor General and at times would even question financial propriety in dealings of Warren Hastings. The affairs came to head when Warren Hastings wrote a scathing minute to a meeting, wherein he alluded that “ I judge of his (Sir Francis) public conduct by my experience of his private, which I have found void of truth and honour. This is a severe charge, but temperately and deliberately made “. By reference to ‘his private’, Warren Hastings was referring to the scandalous affair of Sir Francis with Catherine Grand, one of the most celebrated beauties of 18 century Bengal.

On receipt of the minutes, Sir Francis found no choice but to challenge Warren Hastings to a duel. And the challenge was accepted.

Duelling has had a long history in the western world and with the British, this practice came to India. This was a means of preserving male honour which was central to his identity. The genesis of dueling goes back to ancient Europe in which two disputants battled it out and whoever lost was assumed to be the guilty party. In middle ages dueling became a spectator sport with knights squaring up to fight and a win gave them the bragging rights and honour. However, duelling was a dangerous occupation. It is estimated that 10,000 Frenchmen dies during the period under Henry IV and about 4000 under the reign of Louis XIV.

Coming back to the duel of Sir Francis and Warren Hastings, the challenge was given on 14 August 1780 and accepted. The date of the duel was fixed on 17 August 1780 at 5.30 am. This was to be a hushed affair because when two of the most powerful men in the British India fought, it was bound to lead to speculations and bystanders. Col Pearse gives a vivid account of what transpired on the fateful day in the letter [refn:The British Indian Military Repository, Volume 1 by Samuel Parlby, 1822] addressed to Lawrence Sullivan, a director in the East India company (incidentally Lawrence Sullivan’s grandson John Sullivan founded the hill station of Ooty). 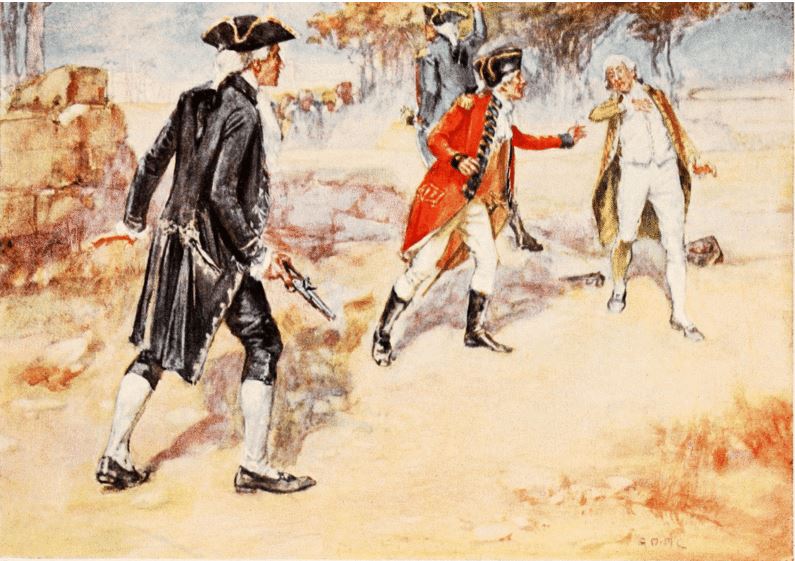 On the fateful morning, Mr. Francis and his second Mr. Watson were already waiting at half past five near Belvedere (present National Library) when Warren Hastings arrived accompanied by Pearse his second. The first issue to be resolved was the location where the duel would take place. Not finding a suitable place at the rendezvous, the group started walking towards Mr. Barwell’s house (now St Thomas School) on an old road that separated Mr Barwell’s grounds from Belvidere, and on that road(present Duel Avenue), a dry spot was located and considered a proper place for the duel.   The road bears the name Duel Avenue, much different from what the duelist had found on the morning of 17 August 1780.

The two gentlemen were not great marksmen, with Francis having never fired a shot before, and Hastings mentioning before the start of the Duel of firing a pistol once or twice. They were also not aware of the rules, which the seconds detailed out. The distance between the duellists was marked out to be 14 paces or 35 feet (precedence from the duel in Hyde Park, 29 Nov. 1779, between parliamentarians William Adam and Charles Fox in which Charles Fox unfortunately died). The duelists were to fire at the count of three and to the extent simultaneously. Neither of them was to quit their ground until they had discharged their pistols. It so happened that Francis’s powder was damp and the ammunition was supplied by the Hastings camp.

On the count of three both the men fired. Francis missed his mark but Hastings found his. Francis staggered on the ground exclaiming he was a dead man. Hastings hearing this cried our “Good God! I hope not”, and immediately went to him.

Pearse in his letter remarks that both the men behaved like gentlemen. As Francis lay on the found injured, Hastings remarked that he hoped and believed the wound was not mortal, but that if any unfortunate accident should happen, it was his intention to surrender himself to the Sheriff. Pearse further goes on to relate that Mr. Hastings seemed to be in a state of such perfect tranquillity that a spectator would not have supposed that he was about an action out of the common course of things, and Mr. Francis’s department was such as did honor to his firmness and resolution.

This is the story of that famous duel, the actors have long gone, 230 years have passed by, but the street still remains, and is called Duel Avenue/street. Much could have changed in the history of India had either of the two duelists had died that day. Hastings went on to remain Governor General for five more years after the duel till 1785, completing the total term as Governor General of 12 years (1772-1785). However the strains of the duel remained, and upon return to England he was impeached in the House of Commons spurred by Edmund Burke on the instigation of Sir Philip Francis (the duel challenger) and it took 7 years of trial and Warren Hastings was acquitted in 1795.

What would have happened had Warren Hastings died is a subject of conjecture, however it is certain that the course of history would have changed. The personalities and principles of the two antagonists Philip Francis were not reconcilable. While Hastings’ policy was dictated by exigencies of the situation and was pragmatic, and his policy ruthless and domineering, Francis’ policy was more theoretical and at the same time dogmatic but perhaps more humane. However, what is certain that course of history did change, with Francis leaving for England immediately after the duel, Warren Hastings had a free hand in running the affairs of India.